ALERTS Thanksgiving Holiday: City offices will be closed Read On... 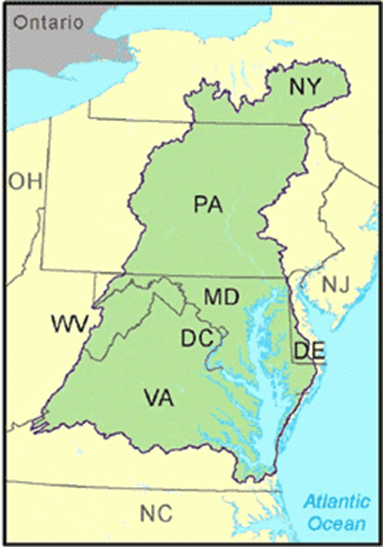 The Chesapeake Bay Total Maximum Daily Load, commonly referred to as the Bay TMDL, is a comprehensive "pollution diet" to restore the health of the Bay and its local streams, creeks and rivers. The Chesapeake Bay TMDL - the largest such cleanup plan ever developed by the U.S. Environmental Protection Agency (EPA) encompassing a 64,000-square-mile watershed - is a multi-state agreement that sets limits on nitrogen, phosphorus and sediment pollution necessary to meet water quality standards in the Bay and its tidal rivers. The partners include Delaware, Maryland, New York, Pennsylvania, Virginia, West Virginia and the District of Columbia.

Pollution limits from agricultural operations, urban and suburban runoff, wastewater, airborne contaminants and other sources were established and then further divided by jurisdiction and major river basin based on state-of-the-art modeling tools, extensive monitoring data, peer-reviewed science and coordination with jurisdiction partners. The final TMDL was shaped by an extensive two-year public involvement effort.

The City is required to develop and implement a strategy to address the pollution limits assigned to urban and suburban runoff sources. The strategy is developed in 5-year increments coinciding with the City's 5-year Municipal Separate Storm Sewer System (MS4) Permit cycle. A Phase I TMDL Action plan was developed in June of 2015. The Phase I Action Plan outlined the strategies and Best Management Practices the City implemented to achieve 5% of the pollutant load reduction goal by 2018. The Phase II TMDL Action Plan outlines the strategies and Best Management Practices the City will implement between now and 2023 to achieve an additional 35% of the load reduction goal. Therefore, successful implementation of the Phase II Action Plan must achieve a minimum of 40% of the pollutant load reduction goal. The good news is that the City's Phase II Action Plan exceeds the 40% goal.

TMDLs are also developed for local streams and rivers. The Appomattox and James Rivers, like all the tributaries of the Bay, are included in the Chesapeake Bay TMDL for nitrogen, phosphorus, and sediment pollution. In addition, the Appomattox and James Rivers, as well as Bailey and Cattail Creeks are also listed as impaired for bacteria due to violations of the state's water quality standard for fecal coliform bacteria, now expressed as E coli.

The City's Bacteria TMDL Action Plan (PDF) has been updated as part of the City's MS4 Permit renewal process. It is anticipated that the James and Appomattox Rivers as well as Bailey and Cattail Creeks, and Poythress Run will have a TMDL for PCBs developed in the coming years. The City will develop a PCB Action Plan for these rivers and creeks as well.